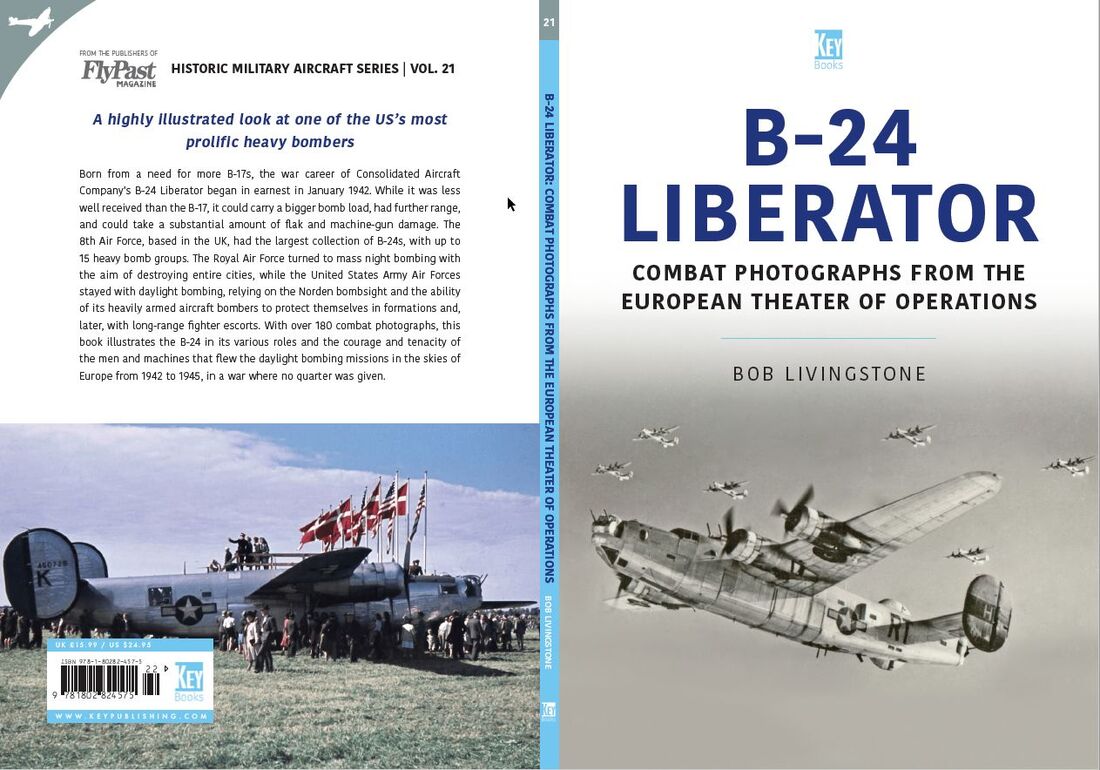 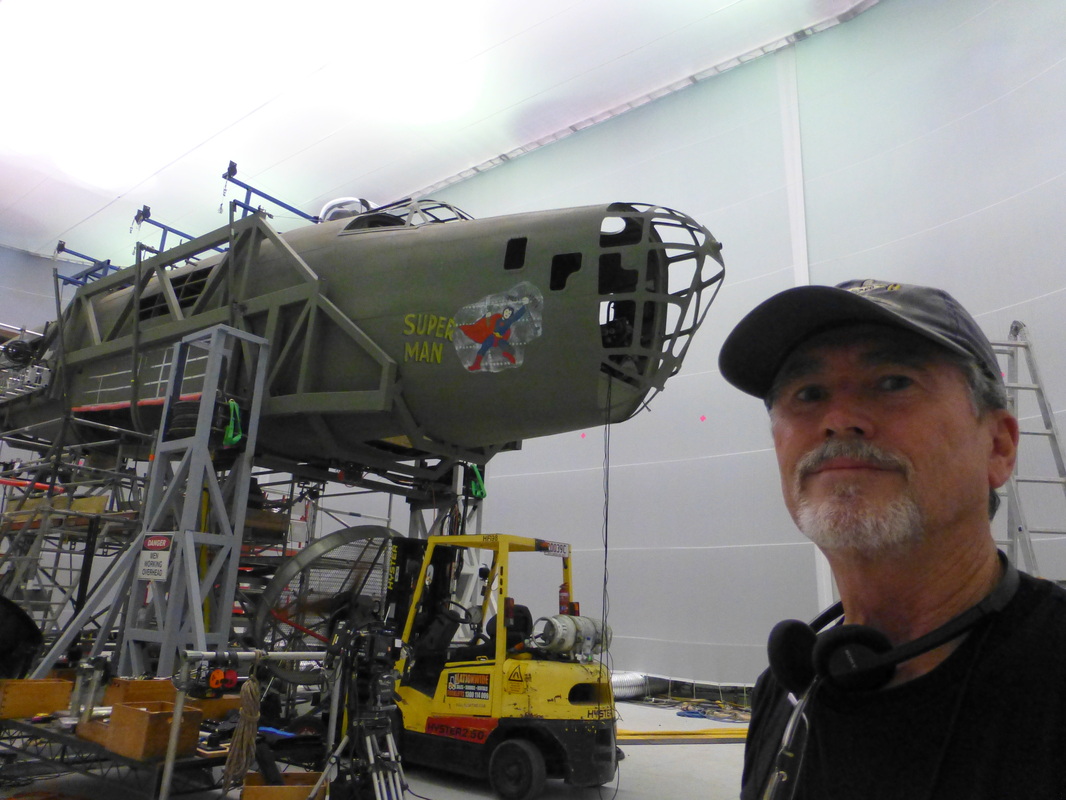 Your webmaster on the set of UNBROKEN in March 2014. I was hired as the B-24 advisor to the movie for a period of three weeks during the filming of the flying scenes.

CLICK HERE to go directly to the story with lots of photos.

LATEST CHANGES TO THE SITE
​
I am stockpiling some changes for 2021 but I have identified a couple of images and these have been removed. A large number of images have come my way and have been added as well as other pages updated.
BatterBam, Bill - Flap and Gear Specialist, Cabin in the Sky, Elie, Fightin' Gremlin, Girl On Phone, Jewel, Miss Alda Flak, One Weakness, ORiley's Daughter, Yugoslavian Partisan operated B-24, Piccadilly Lilly, Picadilly Lily, Reddy Maid and Sunny The Sailor!
​ 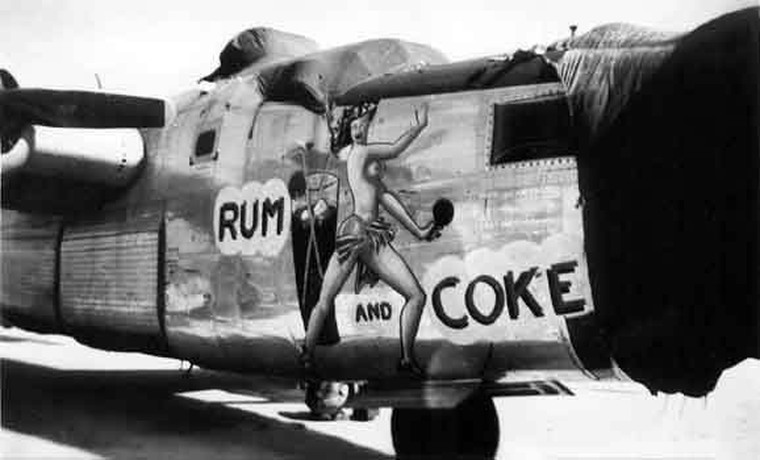 RUM AND COKE is one of my favourite B-24 artworks, not to mention one of my favourite drinks! This was a 43rd Bomb Group B-24L-FO, 44-49827. On September 7 1945 the right mainwheel collapsed while landing at Ie Shima. There were no crew injuries, but RUM AND COKE was salvaged.
The plan for this website is to provide a forum, firstly for B-24 images which have to date defied identification by team members from www.b24bestweb.com (the BBW Team) and secondly to put up other images which are all associated with the B-24 in one manner or another.  The image above is simply one of my favourite "B-24 nosearts" and, I admit, one of my favourite tipples, known these days more commonly as a Cuba Libre, or since my visit to Cuba in 2013, a Cubarta. [Ask me if you don't know the difference]

The trigger for my interest in the B-24 was my father's service with the type.  Murray (decd 8JUN2009) joined the RAAF in late 1942 after initial service in the Militia and was selected for navigation training, qualifying as an Observer/Navigator/Bomb Aimer/Air Gunner at 1 AOS Cootamundra and 1 BAGS Evans Head by May 1943.  His scores were such that he was further selected for General Reconnaissance (anti-submarine) training rather than as a bomber navigator and he qualified as an Astro Navigator at 1 ANS Parkes in June 1943.  Further specialised training was required and this entailed him being sent to Canada as part of the Empire Air Training Scheme and no doubt saved him from becoming one of the more than 4,000 RAAF casualties of RAF Bomber Command.

He was posted to 1 GRS Summerside (Prince Edward Island in the snow) in August 1943 for more Astro navigation training in Ansons and then on to 111 OTU RAF based at Nassau, Bahamas, for crewing up and GR training in Mitchells and Liberators, graduating at the beginning of February 1944. 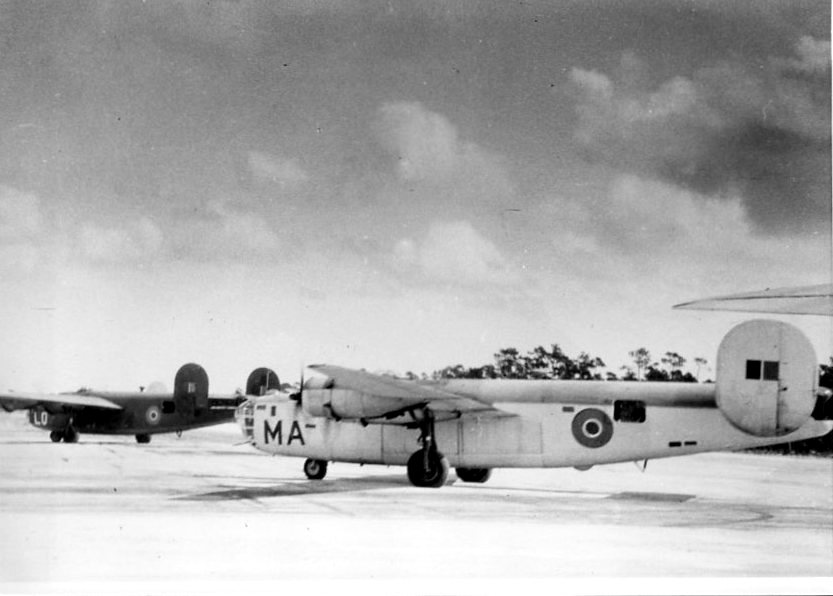 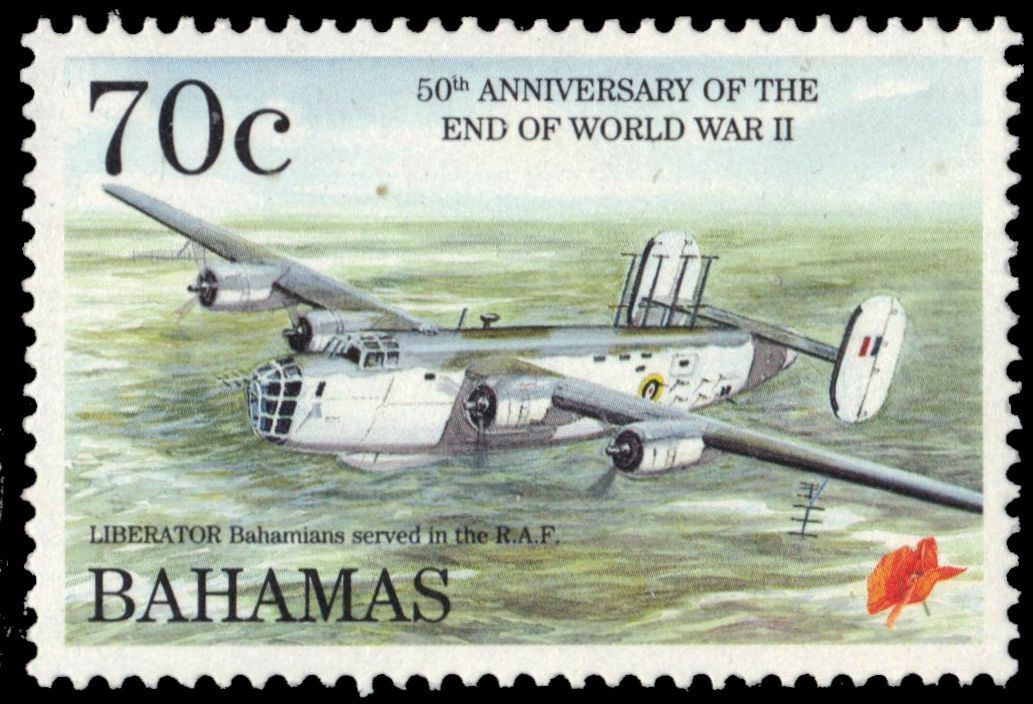 I couldn't resist - not only a stamp from the Bahamas but a Liberator to boot. It's actually celebrating Bahamanians who flew in the RAF and it's a European Theatre Liberator I...but what the heck! 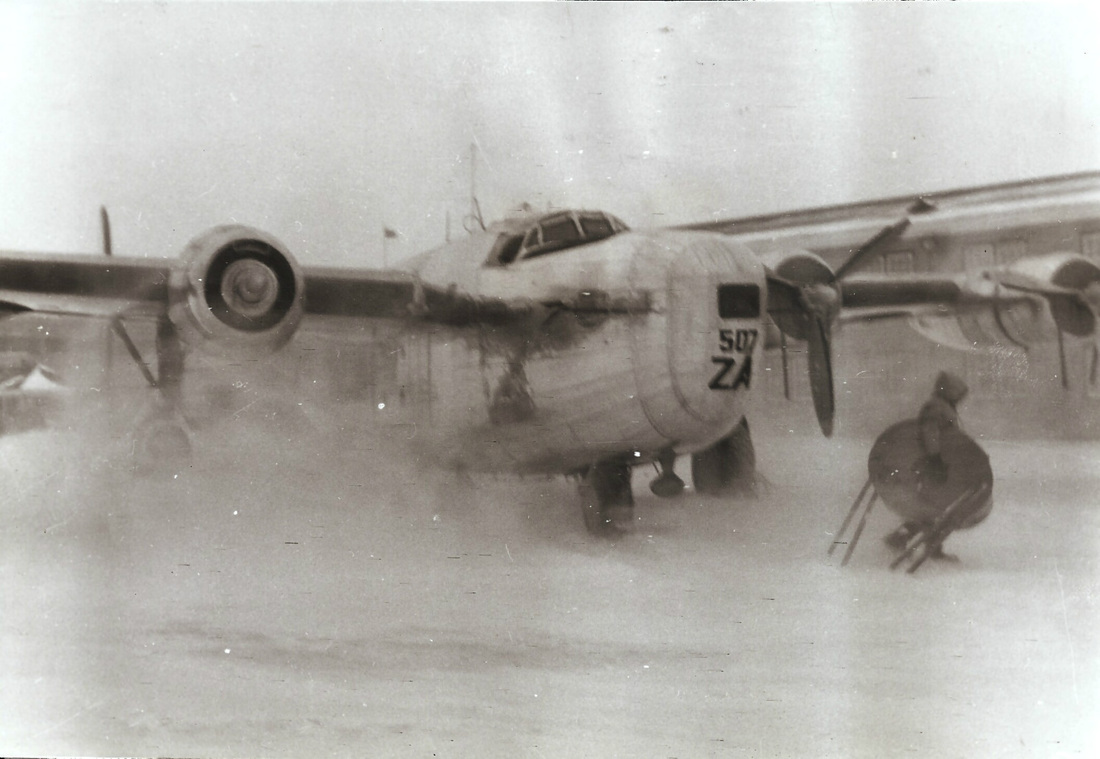 This is an example of winter weather in Dorval; Liberator II AL507 during an engine run in the snow. I hope it wasn't as bad as this on 19 March 1944!
The crew were then assigned Liberator B.VI EV982 at Dorval (Canada) to ferry to India beginning with a 15-hour winter crossing of the Atlantic to the UK - Prestwick in Scotland where Scottish Aviation no doubt tore through the aircraft stripping out non-essential (to the RAF) equipment.  Dad spoke to me of weight reduction carried out in Prestwick, and the RAF was well known for removing as much as possible from Liberators to increase payload. 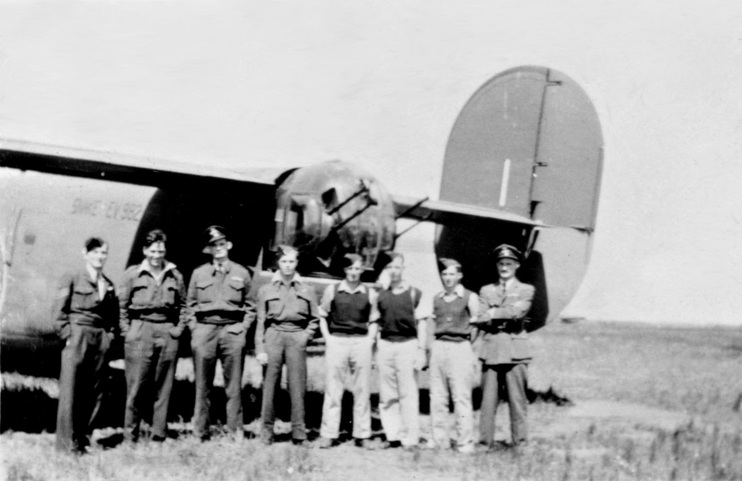 The mixed RAF/RAAF crew posing at the rear of EV982 at Rabat-Sale (French Morocco) in April 1944 enroute to Karachi where they left the aircraft. Note the Boulton Paul 4-gun (.303) tail turret often installed on RAF Liberators. Left to right the crew are: Art Bourne, Jim Menzies, Len Montague, Lennard (Joe) Millard, Bob Woodland, Neil (Bill) Sykes, my father Murray Livingstone and the aircraft captain, F/Lt Trotter.
EEV982 was christened 'Wendy Ann' in honour of the captain's recently-born daughter, but when they arrived at Karachi in May 1944 they were separated from the Liberator they probably thought was theirs.  It subsequently was delivered to 99 Squadron RAF as R-Robert (the unit's first Liberator, beginning the replacement of their Wellingtons) at Jessore and survived the war to be scrapped in India. 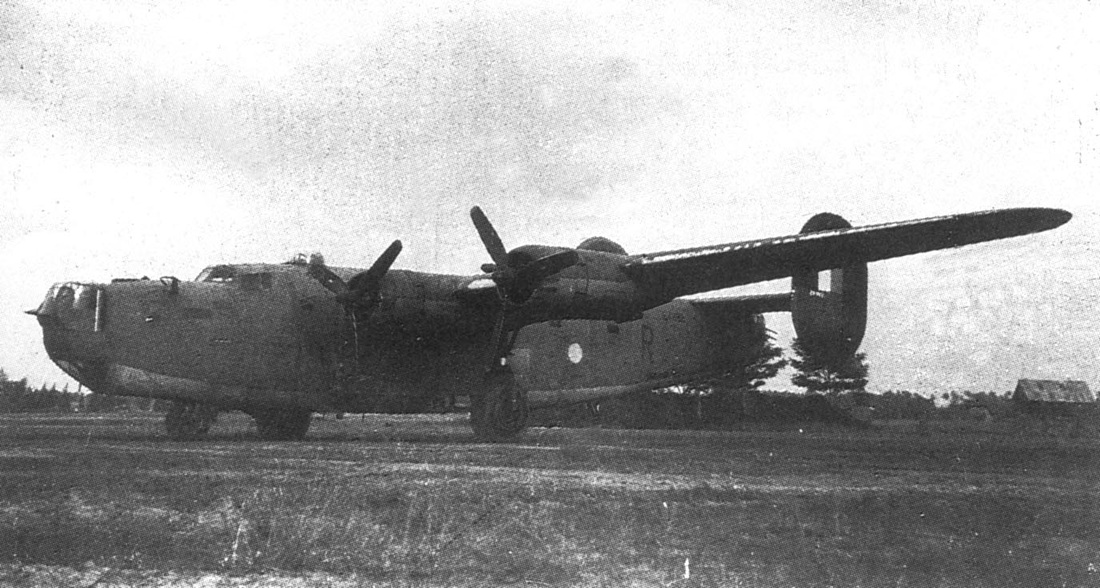 EV982 after delivery to 99 Squadron as R-Robert; the unnecessary (in the tropics) de-icer boots on the wing leading edges have been removed.
The crew spent the next month ferrying various Liberators around India before receiving their posting to 160 (GR) Squadron then based at Sigirya, central Ceylon.  They were allocated recently delivered GR.VI EV819 to ferry to the unit from Allahabad but on take-off struck a truck which crossed the runway in front of them, damaging the right main undercarriage and #4 propeller.  Loaded with fuel and passengers and unable to retract the gear, they stooged around India burning off the fuel while looking for an airfield on which to crash-land.  Each location they tried refused permission, so they returned to Allahabad and crash-landed there.

EV819 at Allahabad on 12 June 1944 after tangling with the truck
The crew must have been given some leave (or maybe they had to wait for the enquiry into the accident) as it was 12 days later before they ferried EV858 to Sigirya.  EV819 never flew again.  They then entered operational training with the Squadron, but Dad's father in Brisbane died and as the family business he was engaged in was a Reserved Occupation, Dad was recalled to Australia to take over the management of the business.  His last flight with the Squadron was on 28 August 1944 in BZ828 and in early September he passengered with 7 others and a crew of five on Qantas Liberator 32-3 (Liberator II) AL619/G-AGKT on the 20-hour direct flight Colombo to Perth, Australia and ended his RAAF service - just as he was about to begin operations.

160 Squadron Liberator GR.V BZ830 with crew on 3July1944 at Sigirya, Ceylon. My father, all of 20 years old, is 5th from the left in side cap and sunglasses. The crew Captain, Flt Lt Trotter, is in peaked officer's cap. I was under the impression that when Dad died in 2009, he was the last of his crew, however in August 2014 I learned that Art Bourne was alive and living in Canberra at the age of 90. 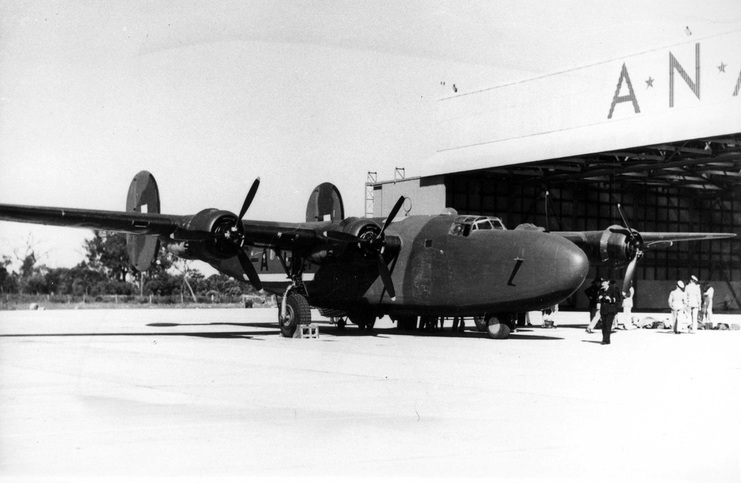 Qantas Liberator 32-3 (ex-RAF/BOAC Liberator II AL619) G-AGKT at Guildford, Western Australia after arrival from the UK for the Qantas Indian Ocean Route. This is the aircraft in which Dad returned to Australia in a 20-hour direct flight Ceylon to Perth in September 1944.
I have written and had published two books on the B-24, the second of which (STRIKE BACK) is still available from the publisher, and while I'd like to write more, now just the research seems to take up all my spare time!
In January and February 2014 I was hired for a period of three weeks as the B-24 advisor on Angelina Jolie's movie UNBROKEN, the flying scenes and some of the raft scenes being shot south of Brisbane on the Gold Coast in the sound stages of Warner Brothers' Movie World.  My story and photos of what that was like can be found here.  I'm pretty sure that this will be my one and only credit on a Hollywood movie!

The b24bestweb Team is a group of B-24 afficianados [read nerds] with personal agendas who  have come together through the WWW to pool their research, knowledge and information, and in the process of acting as a "group mind", to identify with some certainty the B-24 images which we access through all media.

The process of attaching artwork on B-24s to specific AAF serials is a complex one without a clear photograph showing both the name/artwork and serial.  Since these are generally at 'opposite ends' of a B-24, getting both together in a readable form is not common.

The B-24 remained in production throughout the war and at a number of plants in addition to the two managed by CVAC/Convair.  Each found its own specific way of doing things which can sometimes be discerned in a photograph.  Additionally, modifications were constantly being incorporated into the production line, paint schemes and markings changed and these are also pointers towards probable serial ranges when they can be discerned.

The Stateside post-production modification centres also added their fingerprints to many airframes, followed by the field modifications often required by specific Army Air Forces across the globe; then there were the non-AAF Allied operators of the type, including AXIS and neutral countries which obtained small numbers of airframes.

The fact that 19,256 individual airframes were built makes the process just a little more difficult.  Outside of a few single engined fighters (Spitfire, Me-109) and some designs (particularly the IL-2) from the USSR, the number of B-24s and its derivatives exceeds the production of almost all other aircraft types in history - a record unlikely to ever be broken.

Because of the essentially transient nature of the B-24 in combat, artwork sometimes lasted a very short time.  For those aircraft which lasted longer, crew or unit changes sometimes meant a change of artwork, and often different artwork was carried on either side of the nose of the same aircraft; relating the two can be difficult.
Photos themselves are ephemeral, personal cameras were not offficially allowed, film was difficult to obtain and
expensive and processing equally difficult.  Censorship of both the artwork and the photographs meant that no record of all the artwork exists, and many photographs were thrown away in the years after the war.  The
artwork is often photographed in isolation from the rest of the airframe thus reducing identification features.  Images available to the Team are often significantly degraded and lack the ID features we would look for.  Many B-24s served in more than one role which involved paint-stripping or a full re-paint and thus a loss of artwork and the opportunity for fresh artwork.

If you have any information on any of the images, or just wish to share some comments with me, send me an email via the contact page or sign up to the Bestweb WebBoard at http://b24bw.proboards.com/ and post your
comments for all to see. 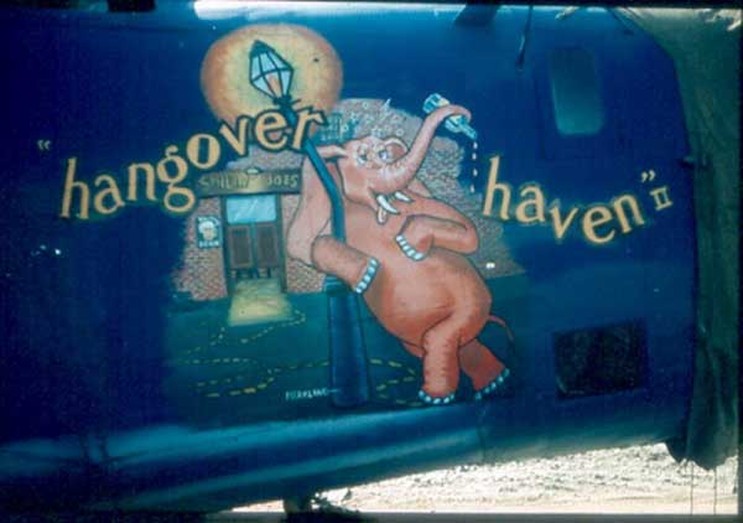 Hangover Haven II, F-7A 42-64053, 6PRG 20CMS, salvaged on Biak Island in 1945, by which time it had lost its blue paint for NMF but retained the artwork, a classic of Al Merkling
Another favourite of mine.  Now, select a page from the menu and either enjoy some of the B-24 trivia on
this website or see if you can help put an identity to any of the aircraft featured on the serious pages.

OzBob from the B-24 Bestweb Team

PROUD TO BE A VIETNAM VETERAN